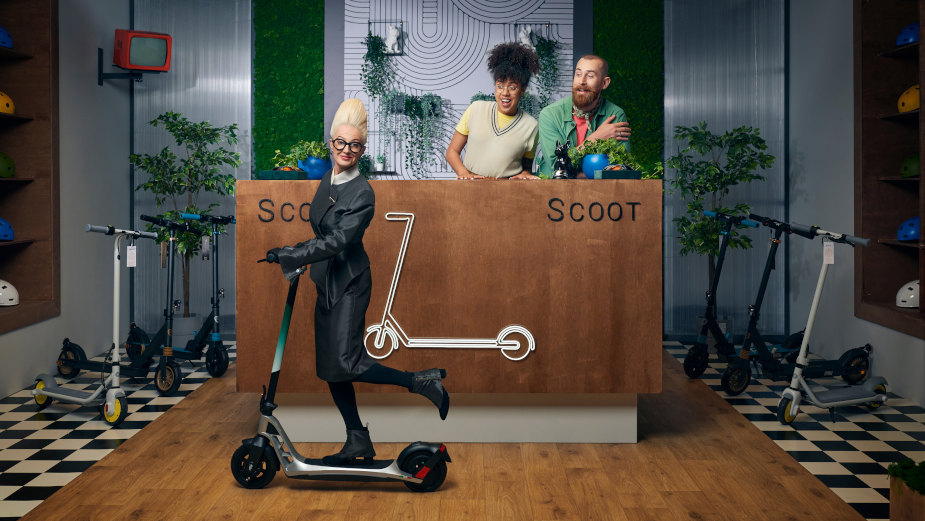 ‘Relax Darlings’ – she’s back. Aunt Helga, the UK’s favourite Teutonic tech wizard, is returning in a new brand positioning campaign for web hosting and cloud provider IONOS. The marketing drive aims to broaden IONOS’ reach and cement its position as the #1 digital partner to solve web-related problems for small to midsize businesses and creative studios, by supercharging design and online retail capabilities.

The new work consists of a TV commercial underpinned by digital marketing. It builds on the resounding success of last year’s launch campaign which was made by branding agency NOMAD, creative production studio Armoury London and advertising agency 2050 London.

2021’s ‘I own this’ campaign introduced the small but mighty character of Aunt Helga to the British public – instantly establishing her as a new brand icon, joining the ranks of Compare the Market’s Meerkats, the Andrex Puppies and the PG Tips’ Chimpanzees. In addition to generating record-breaking traffic to IONOS’ site, prompted awareness also increased significantly – a powerful example of a ‘positively bonkers’ creative concept translating to commercial success.

The new spot sees the diminutive yet inimitable heroine return in a futuristic new setting to dispense some tough love and tech savviness to small business owners.

Beamed in through a cosmic portal, Aunt Helga deploys her signature mix of Germanic uber efficiency and fast fingers – plus her trademark catchphrases of “Nice, nice, nice” and “I own this, darlings” – to upgrade the old school website of a fashionable e-scooter boutique at lightning speed. In addition to her Karl Lagerfeld-inspired uniform of head-to-toe black trenchcoat, elbow-length gloves and statement glasses, Aunt Helga totes a couple of new additions reflecting the brand’s fresh focus on technological capabilities: a glowing, Back to the Future-esque hoverboard and an outsized helmet to accommodate her signature blonde beehive.

Directed by Armoury’s Sidney Van Wichelen, the commercial combines in-camera trickery, CGI and post magic to bring the fantastical cartoon world of Aunt Helga to life. The spot continues to riff on the “I own this/IONOS” line introduced in the launch campaign, but refines the brand message further, emphasising IONOS’ premium and expert services. Snappy editing and camera angles, coupled with more intricate graphic tech sequences, visually reflect Aunt Helga’s – and therefore IONOS’ – professional know-how and their ability to step in and “own” the web and design problems that can plague small businesses, creatives and digital agencies.

Arthur Mai, chief marketing officer at IONOS says, “If a business wants to be successful in the long term, it has to be present online. With the campaign, we want to show companies how they can use digitalisation for their benefit. We support them with individual advice and suitable solutions – from the right domain to their own website up to a professional cloud infrastructure.”

Terry Stephens, partner and executive creative director at Nomad, “This is the kind of idea that initially seems a bit crazy in a business context – but in fact Aunt Helga is exactly the type of character that real people remember and respond to. Her Teutonic efficiency, sharp fashion sense and no-nonsense approach has really stuck in the hearts and minds of the British public – so much so it begged the question: “What’s next for Helga?” The answer, naturally, was to help her onto her next mission – assisting another generation of business owners and creative studios to up their web game.”

Adam Chiappe, creative director and founder at 2050 London, “It was great to have the opportunity to bring Aunt Helga back for year two – and making sure she retained her bonkers persona was paramount. With Aunt Helga we feel we are well on our way to creating a new breed of enduring brand characters, one that speaks the language of a modern tech brand like IONOS.’

Lauraine Bhuglah, agency producer, account lead at Armoury London says, “When we first created Aunt Helga last year we wanted to introduce a fresh voice into tech – and we knew from the start that she would stand out. We stuck our neck out to create something unexpected – but most importantly, memorable: a diminutive yet commanding older woman – the kind of character we actually quite rarely see in advertising. Quite often older women are packaged up as the cosy grandmother type, so we decided to make an older woman with a bit more attitude – and a bit bonkers. We love her… and clearly the target audience does too, as the results from last year’s campaign were so high above the benchmarks that were set. So this year we knew we had to bring her back, and developing her story further was a joy – when you create a fictional character that’s this strong, they almost start living a life of their own… and that’s been the most fun part.”

The campaign will air on TV across multiple UK channels, underpinned by a series of online videos and a Spotify audio ad.